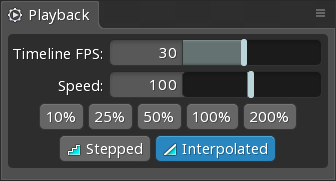 The default timeline FPS for new projects can be set on the settings dialog.

While 30 FPS is a good default for most users, some animators have an intuitive sense of how many frames a certain movement will take when animating at 12 or 24 frames per second.

Changing the FPS can also be useful when animating fast movement. Holding shift allows setting keys between whole number frames, but if that is needed often it may be more comfortable to increase the FPS to retain the benefit of snapping to whole number frames.

The speed slider controls the playback speed. This can be useful to play an animation slower than normal to ensure that there are no errors that would be hard to see at a faster speed. The percentage buttons provide shortcuts for setting the slider to the corresponding value.

The playback speed affects playback of all skeletons and animations equally. It is not stored between Spine editor runs, exported, or available at runtime. Code that applies an animation at runtime is free to use its own speed multiplier.

When enabled, a stepped transition is used between all keys. This means no interpolation will occur between keys. This can be useful to see the keyed poses of an animation without being distracted by interpolation between keys, such as when animating using pose to pose.

When Interpolated is not enabled, playback is rounded to the nearest frame. This means no interpolation will occur between frames. This is a stylistic choice which makes playback less smooth, resulting in a look similar to frame-by-frame animation.