Knowledge of these basic concepts is necessary to set up your own skeletons.

Each skeleton in the project appears in the tree view, along with all the bones, slots, attachments, and other information that make up the skeleton. A project may have multiple skeletons. To add additional skeletons, choose New Skeleton from the Spine menu. 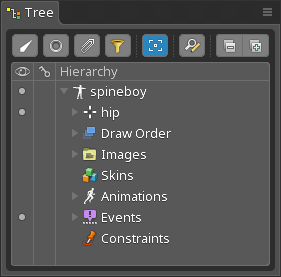 A skeleton has a hierarchy of bones. Each bone has a rotation, translation, scale, and shear which is called the bone's transform. When a bone is transformed, its children are affected. For example, moving an arm bone will also move the hand bone. This hierarchical nature of the bones makes manipulating images more intuitive, allowing the animator to focus on the large scale motion. It also makes it easy to keep the distance between elements consistent, when desired.

Bones are used for most animation in Spine, even skeletons that are not humanoid or animal. Simple skeletons can use a bone per image. Meshes can be used to animate images without using bones. 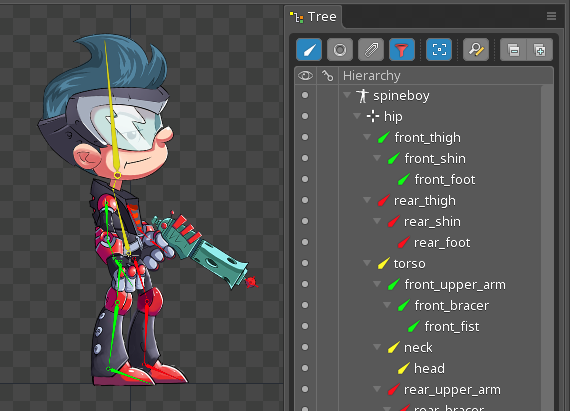 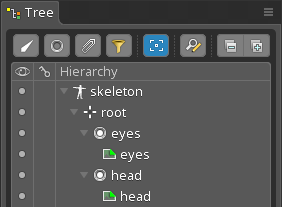 root is a bone with two slots, eyes and head, and each slot has an attachment with the same name. 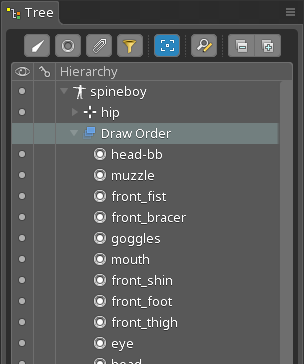 A slot has a color, which is used to tint attachments that use images.

Next: Images Previous: Getting Started